>> Member Milestones >> Keep on a Schedule 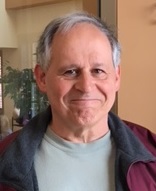 Meet Roger Schmitt! Roger (71) is happily married to his wife Barb and has been a Bellin Health Fitness member since 2012.

Roger’s motivation for beginning his fitness journey was wanting to just stay active. When he initially started coming to Bellin, it was hard to maintain a consistent workout schedule because he was on shift work.  But now that he has more time, he is able to come 4-5 times a week.  Now that’s dedication!

His goals were to maintain muscle tone and control his weight. Roger commented that he has done okay with is first goal but not as good with his second.

Roger stated that the biggest part of his success is due to the fact that Bellin Health Fitness is open seven days a week. He feels that has really helped him reach his goals as well as always getting good advice from the staff.

When asked how his life has changed, Roger said, “I guess I’ll never know (which is a good thing).” He believes that without Bellin Health Fitness he wouldn’t feel as good as he does, he would probably be on more medications and he wouldn’t be as active as he is now.  That is a good thing!

The advice that Roger would give to help others on their fitness journey is to keep on a schedule, don’t take too much time off of exercising and to ask questions. He also advises that you should join whatever sessions/classes you have an interest in.